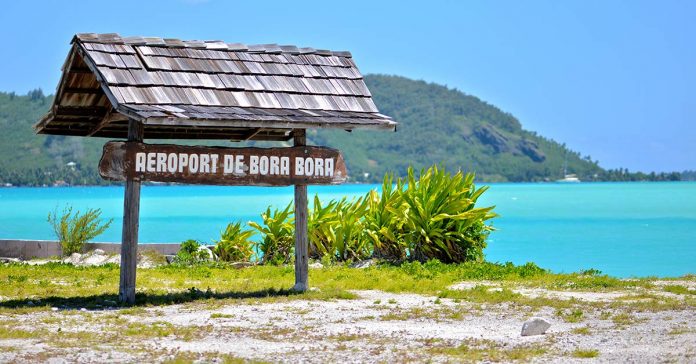 Bora Bora is a truly magical place – a small volcanic island grouping which is a part of a bigger French Polynesia archipelago. Even though you can technically treat it as a group of islands, these two landmasses (one significantly bigger than the other) are held tightly together with a barrier reef that renders them a single geographical entity. This extinct volcano is an extremely popular international tourist destination. Visiting it is a truly magical experience and if a joyous occasion ever arises, here is everything you need to know about traveling to Bora Bora.

The island covers the territory of 30.5 km2 and it has a population of around 10,000 people with the biggest settlement, Vaitape, serving as home to half of the citizens. It is located on the western part of the island. The most notable geographical landmarks are two peaks of the extinct volcano – Mount Pahia and Mount Otemanu, the highest point rising to 727 meters.

A Bit of History About Bora Bora

Polynesian settlers inhabited the island circa 4th century C.E. As for European explorations, it was first noticed by Jakob in 1722. The first explorers that set foot on the island were led under the command of Captain James Cook in 1769. However, it became one of the numerous colonies of France in this part of the world under the leadership of Admiral Abel Aubert Dupetit Thouars, in 1842.

Bora Bora played a crucial role in World War II when the US decided to use it as a military base. Because of this, after the war, it was the only international airport of French Polynesia until 1960. To this day, it relies heavily on tourism and it has some of the most luxurious resorts and hotels in this part of the world. The climate of all surrounding islands is tropical and there are two seasons overall. The wet season which runs from November to April can put off some tourists since the air humidity is really high. Additionally, the storms can be unpredictable and strong. The dry season runs from May to October, and this is when tourists visit it the most and the prices sky-rocket.

Luckily, most locals have a good comprehension of the English language. Their native tongue is a mixture of French and Tahitian and you can learn some of the bare-bone basics before you arrive at the island. Most of the tourists on the island are the Americans, Europeans, and Japanese, so asking other tourists for directions is always an option. Since most of the people from these regions know English (including the Japanese), communication should be a breeze.

Bora Bora boasts some of the most luxurious accommodations you can imagine. Intercontinental, St. Regis and Le Meridien all have “outposts” at the island. Boutique hotel Sofitel Bora Bora Private Island offers unique rooms and a 360-degree view of Otemanu Mount and the lagoon. For a mid-range and smaller budget, you can stay at Manureva House – an amazing rental that can accommodate up to five people and Sunset Hill Lodge. Since French Polynesia is dotted with islands that are very far away from most great landmasses, the chances are you will get there via plane. Once you land, getting around is fairly easy – you will use a ferry to leave the airport, and moving about the island is pretty easy. Public transport is fairly limited, so if you do not like to walk, you can use/rent a bike or a small buggy. Enjoying Yourself in Bora Bora

Even though Bora Bora is pretty expensive, there is a great variety of free activities to enjoy. First of all, there is so much you should see – the island is an impressive volcanic caldera with a unique topography. Visit Bora Bora Lagoonarium and plunge into the water with a certified diver to inspect marine life face to face. Swim and sunbathe at the famous Matira Beach which is located at the southern tip of the main island.

As a tropical slice of heaven in the middle of the Pacific, Bora Bora shares its home with countless other breathtaking locations. The fact that it is one of the most popular islands among tourists worldwide should tell you everything you need to know. Once you have spent a vacation here, you will easily spoil yourself with this breathtaking luxurious spots and find a reason to go back sooner than you think. All water-related activities such as jet skiing, kite boarding, scuba diving, and snorkeling are an option. Marie is a lifestyle blogger who loves unusual trips, gadgets and creative ideas. On her travels, she likes to read poetry and prose and to surf the Internet. Her favorite writer is Tracy Chevalier and she always carries one of her books in her bag. She is an avid lover of photography who loves to talk about her experiences. You can find Marie on Facebook or follow her on Twitter and Pinterest.