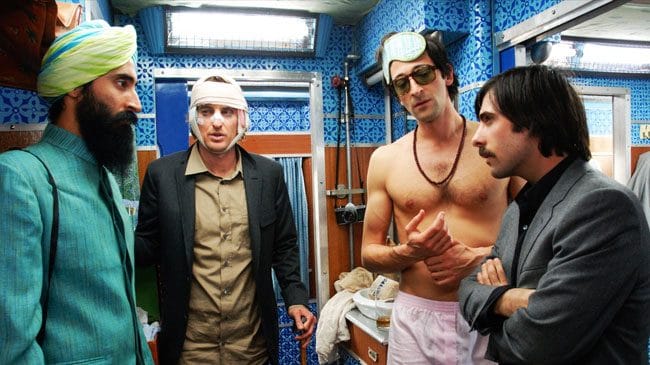 Through travel movies, we can experience other places without being there. But even if films are no substitute for real traveling, they can offer inspiration and motivation at those time you can’t travel. Dream yourself away into the character’s shoes or ignite that travel spark that lies dormant inside of you.

When I started compiling this list of top travel movies, I quickly found how hard it was for me to pick a top 10, so I went with a top 12. They are after all my personal choices for the best wanderlust movies. I tried to pick movies where travel and exploring unfamiliar locations are a big factor and will make you want to pack your bag after watching. I hope I succeeded! A Woody Allen flick which follows two girlfriends (Scarlett Johansson & Rebecca Hall) on their summer holiday in Spain as they explore new art, culture, and music. They meet a seductive painter played by Javier and later the fury of his ex-wife (Penélope Cruz). I have always had a little bit of a hard time enjoying Woody Allen-movies but this one feels different and the European vibe from it is great. IMDb-link

Trivia: The city of Barcelona offered to pick up the tab of production costs if the film was shot there. The amount rose up to two million Euros from public funds which created some controversy in Catalonia. This movie has always had a place in my heart since I was a kid. It was one of the few movies we had on VHS back in the day so I saw it many times. The movie follows Heinrich (Brad Pitt), an Austrian mountain-climber who travels to climb the Himalayas. However, he becomes a prisoner of war and later escapes and befriends the young and curious Dalai Lama. A beautiful movie based on a true story. IMDb-link I promise this movie isn’t as bad as the DVD cover makes it out to be. It follows a young man from New York who tries to get in touch with his roots in Shanghai, while at the same times handling romantic relationships and his relationship with his father. A clever and humorous movie with fun culture crashes that will stay in your head. IMDb-link

9.The Art of Travel First of all, this is not a good movie in the sense that you would usually critique movies. The plot feels unrealistic in the way that events coincide as a young high school grad drops everything to go on a solo journey in Central America. On the way, we get to see the sides of solo travel as well as romantic relationships on the go. In general, it is fun and has a clever dialogue with interesting characters. The scenery is beautiful and the movie is great to watch to get your travel spark on. IMDb-link A really great road trip movie that more people should see. Starring Jack Nicholson and Morgan Freeman, we get to follow two terminally ill cancer patients as they escape on a road trip to check off their bucket list. The chemistry and dialogue between the two actors are great and will make you laugh and at other times the movie will bring a tear to your eye. IMDb-link

Carter: Even now I cannot understand the measure of a life, but I can tell you this. I know that when he died, his eyes were closed and his heart was open. And I’m pretty sure he was happy with his final resting place, because he was buried on the mountain. And that was against the law. Bill Murray plays an aging and fading actor who now resorts to doing Japanese commercials. While in Tokyo he meets a bored housewife (Scarlett Johansson) with whom a strange friendship appears. The movie shows the other side of travel when things aren’t as great as you’d hoped because of culture clashes and a completely different language. A film with beautiful shots and a great story. Don’t miss it. IMDb-link This is also one of those movies where the DVD cover gave me another expectation of the movie. I was positively surprised and it was much more entertaining than I thought it would be. This film follows Todd (Josh Hamilton) who manages a call center in Seattle. One day the call center gets outsourced to India and he travels there to train his replacement as well as teaching them to sound “American”. It also follows Todd as he explores the Indian culture and as the Indians explore the American workplace. A movie that will both make you feel good and want to go travel. IMDb-link

Purohit: I’m Purohit Narsimacharaya Virajnarianan. But you can call me Puro. This has always been a favorite ever since it came out. I think it has something to do with my inner child’s fascination for airports and flight, having explored many of Asia’s greatest hubs as a kid. Anyway, the movie follows Ryan Bingham (George Clooney) who works as a corporate downsizing expert and basically flies around the US to fire people. It also gives an interesting look into living as a business traveler. Otherwise, it is actually a good, funny and enjoyable movie which you should see if you haven’t yet. IMDb-link

Ryan: [on getting through airport security] Never get behind old people. Their bodies are littered with hidden metal and they never seem to appreciate how little time they have left. Bingo, Asians. They pack light, travel efficiently, and they have a thing for slip on shoes. Gotta love ’em.
Natalie: That’s racist.
Ryan: I’m like my mother, I stereotype. It’s faster. This is a classic and an easy choice. If you are reading this article and haven’t seen this movie, shame on you. A group of young travelers who live in an unidentified paradise somewhere in Thailand, where they all live together trying to keep their island a secret as they are threatened by outside forces. At times the movie can be a bit cliche and obvious, but it still a good movie and one of the great ones in the travel genre. I’m sure there are many backpackers out there that got a lot of inspiration from this movie when they started out, maybe even to try to find Daffy. IMDb-link A wacky Wes Anderson movie starring Owen Wilson, Adrien Brody, and Jason Schwartzman as three brothers who travel through India to try to repair their old bonds. Happy, fun, sad, stupid and random are some words that I think would describe this movie well for me, however, it can be a hate it or love it situation. It will definitely make you want to visit India though. IMDb-link

Trivia: Natalie Portman, who appeared in a cameo, traveled to the film’s location in Jodhpur, India, to shoot for about half an hour and then spent 10 days exploring India afterward. This is one of my favorite movies of all time and it is often one that is missed by many. It follows two medical students, Che Guevara and his friend Alberto Granado,  on their four-month and 8,000 kilometers long motorcycle journey through South America. On a quest to see things that they’ve only read about in books, it definitely gives you a lust to explore South America. The movie features footage from the whole continent, such as down in Patagonia as well as the backstreets in Chile. IMDb-link Freedom is one of the larger themes in this movie. Many will associate and dream of the characters needs to break free from society. To let go of everything and do what you want to do. This is the ultimate dream for many and it is portrayed in such a beautiful way. Emile Hirsch does a brilliant job together with the other actors as the main character is shaped by the characters he meets on the road. Chances are that you have already seen this movie, if you haven’t, you know what to do. IMDb-link

Christopher McCandless: It should not be denied that being footloose has always exhilarated us. It is associated in our minds with escape from history and oppression and law and irksome obligations. Absolute freedom. And the road has always led west.

I hope you enjoyed our list of the best travel movies. Did we miss a movie that should be on the list? What is your favorite travel movie? Let everyone know in the comments below!