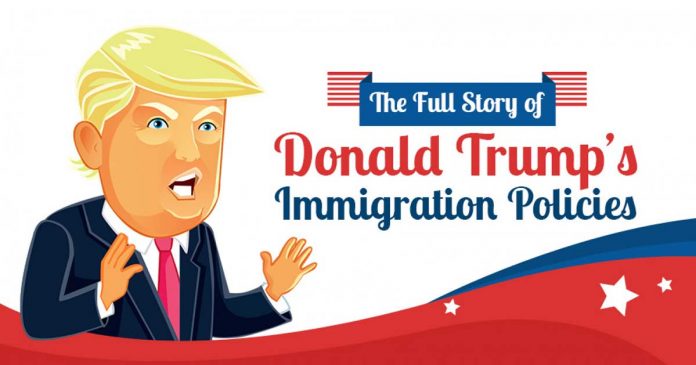 His first two executive orders(EO) relating to immigration were reasonably straight forward but it was his third EO that caused controversy with some people calling it a ban on Muslims. The order initially caused chaos at airports and affected legal permanent residents from returning to the United States.

The order then went through various revisions but did come into effect officially on June 30th, 2017. People traveling to America will need to establish a ‘bona fide relationship’ with someone in the U.S before being allowed entry. Only certain family members count as bona fide.

Find out about the impact of the travel ban and more in the infographic. There are still many unanswered questions that we will only find out the answer to as the new order comes into effect.

Below is the full text from the infographic

When Donald Trump announced his candidacy for the Presidency in June 2015, he made immigration policy a cornerstone of his campaign. Here is everything you need to know about Donald Trump and his policies on immigration.

Even before he became President of the United States, Trump’s campaign was heavily focused on strict immigration laws. The Trump campaign had strong stances on immigration from the outset:

Enhancing Public Safety In The Interior of the United States – Purpose: To enforce the nation’s immigration laws in the country. The order targets those who overstay or violate the terms set out in their visa.

The Story Behind The Travel Ban

Trump’s third EO was more controversial with some observers calling it a “Muslim ban”.

Protecting The Nation From Foreign Terrorist Entry Into The United States – Purpose: To detect individuals with terrorist ties and stop them from entering the United States.

What the Travel Ban Meant

The order blocked entry to the United States for both immigrants (green card holders) and non-immigrants (temporary visa holders). Trump contended that the order did not discriminate based on religion.

The countries were first singled out by the Obama administration and President Obama, and after the San Bernardino terrorist attack, Obama signed an order identifying these places as countries of concern. This didn’t stop anyone traveling to the United States, but it did prevent them from traveling to the United States without first obtaining a visa.

The order meant that people who recently lived or visited the countries listed could no longer participate in the Visa Waiver Program.

Trump’s order aimed to ensure that those approved for admission do not intend to harm Americans and that they have no ties to terrorism.

What Was the Impact of the Travel Ban?

At least eight groups appealed the order alleging that it was unconstitutional and as a result, a U.S. District Judge issued a temporary restraining order halting its enforcement.

The new order was scheduled to come into effect on March 16th with a variety of waivers and provisions included to ensure travel restrictions were applied to certain individuals. Travel restrictions from Iran were also removed from the revised executive order.

However, on March 15th, hours before the ban was set to come into effect, a federal judge in Hawaii blocked the new travel ban – deeming it unconstitutional.

As of June 30th, 2017, U.S. consulates and embassies around the world no longer approve visas from the aforementioned countries, unless these people can establish a “bona fide relationship” with someone in the U.S.

Officers are allowed to grant visas to people who would otherwise be banned if, for example, they are in need of urgent medical care or doing business with the U.S. government or it would cause “undue hardship” if a visa was denied.

A “bona fide relationship” can be with a business or university. For example, someone may have a job offer or be attending a conference.

Only certain family members will count as “bona fide” and relations including grandparents and grandchildren, aunts, uncles, nieces, nephews, and cousins do not count. This list originally included fiancés but this was changed before the order was finalized.

People who already have a valid visa prior to the deadline are allowed entry to the U.S.

How transparent will the officers be in denying visas?

The U.S. government can deny a visa for a variety of reasons and it’s extremely difficult to challenge a visa denial.

The Supreme Court may decide that what warrants a “bona fide” relationship under Trump’s immigration policy is unconstitutional.

How will consular officers define what constitutes waivers for “undue hardship”?

It is still unclear what “undue hardship” is in the eyes of consular officers.

The illogic of the Governments contentions is palpable. The notion that one can demonstrate animus toward any group of people only by targeting all of them at once is fundamentally flawed.
Judge Derrick Watson, United States District Court for the District of Hawaii

The executive order adversely affects the state’s residents in areas of employment, education, business, family relations and freedom to travel.

Editors Note: aTRAVELthing.com was founded with a mission to inspire and encourage others to travel and see the world they live in. We believe that through travel we are able to learn about each other and in so doing, realize that we have far more in common with each other than politicians and governments want us to believe. This world is too small for walls, which by their very nature only divide us. We all belong to the same country… its name is Humanity.