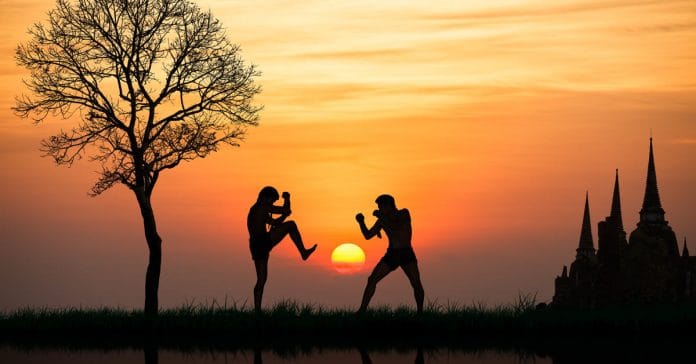 I took one semester off of San Diego State University to backpack Thailand when I was 20. It was my first time in Thailand. To be honest, I was terrified. Everyone told me to wait until I graduated from college but I didn’t listen. I don’t recall what exactly pushed me to do it, but I am glad I did. 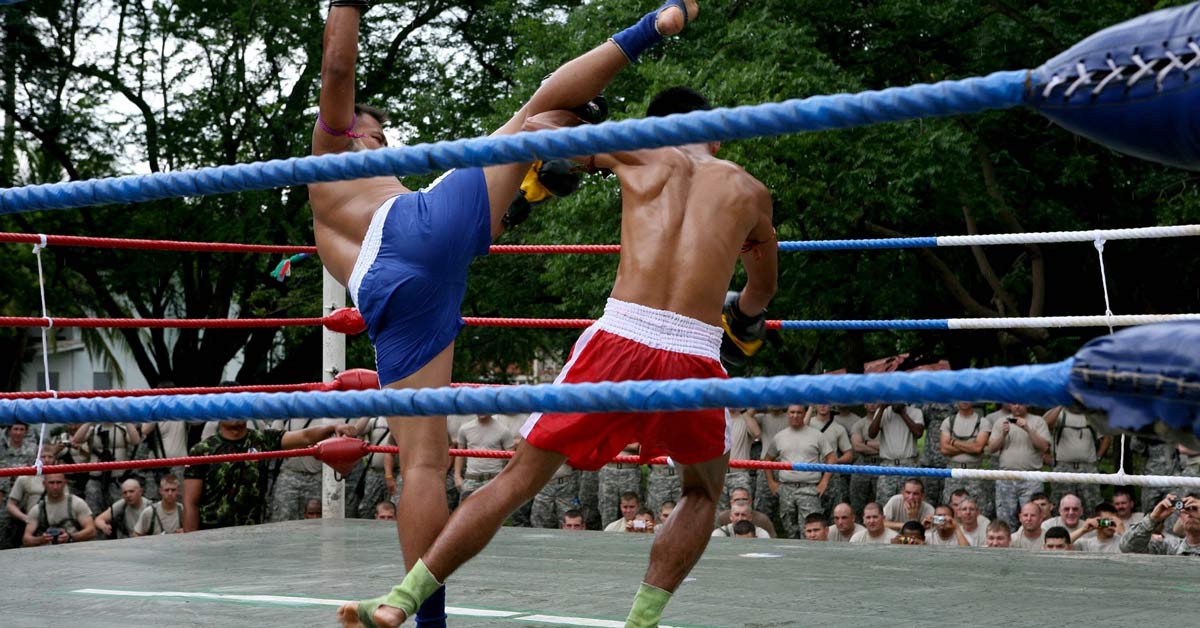 I smiled and said “absolutely”.

It was my friend Larry. I met him at a week-long internet marketing retreat my first week out here in Chiang Mai, Thailand. Larry was from Chicago, was in his mid 30’s, and loved martial arts as well. I was excited because I loved watching Mixed Martial Arts at home.

Wrestling in high school was my only martial arts experience. I only weighed about 100 pounds my freshman year of high school, so I thought I was too small for football. In wrestling, there were weight classes so I would wrestle someone the same weight as me. That is why I came to tryouts. Mixed martial arts (MMA) always fascinated me. Since I wrestled, I could relate to the little details and work it took to compete in a one-on-one sport. Football, Basketball, Soccer, and Baseball you competed with teammates.

In wrestling and MMA, it was only you and another person competing. If you lost, it was all on you.

Wrestling was such a big part of my life, I knew I wanted to continue to learn martial arts after high school. This was an opportunity to learn some Muay Thai.

We packed our workout stuff and headed out to Lanna Muay Thai in Chiang Mai. The humidity was unforgiving. Makes me grateful to be living in San Diego. I got to Lanna Muay Thai and I parked my little rental moped outside the front. I put my helmet down on the mirror as I admired the giant ring and the heavy bags outside. It was only about 9:45 am. The next class was about to start soon. All the trainers started to come out. I could tell all the trainers lived in the back of the gym. I was like a kid on Christmas day. I was so excited. My eyes veered off admiring the beautiful gym. The musk of sweat on the mats. The sounds of pads being hit.

A trainer walks up to me and tells me it would be 400 baht for the day. That was roughly $12 U.S dollars. Not bad. I pulled out my wallet, handed him my cash and put my bags down. The trainer hands me my hand wraps. I don’t know how to wrap hands because I have never really boxed before. I stared blankly at the trainer holding up my hand wraps. The trainer laughed and started to wrap my hands. 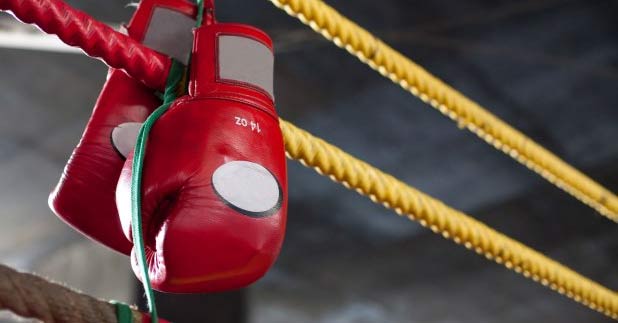 First off was pad work. I was excited and a little nervous. The energy in the gym was very relaxing. The trainers were always smiling. Thailand is known as “the land of smiles”. I can see why now. The trainers would tell me a combination and then I would go slow to do it. I would pick up speed as I became more confident. The trainer would yell with enthusiasm as I hit the pads. “OI !!” The trainer would shout as I landed a combination. “EY !!” the trainer would shout every time I landed a knee. It was oddly satisfying to hit pads. Hearing the sounds the pads would make when my fist hit them was awfully gratifying. “Pop, pop, pop”. It had a rhythm to it. 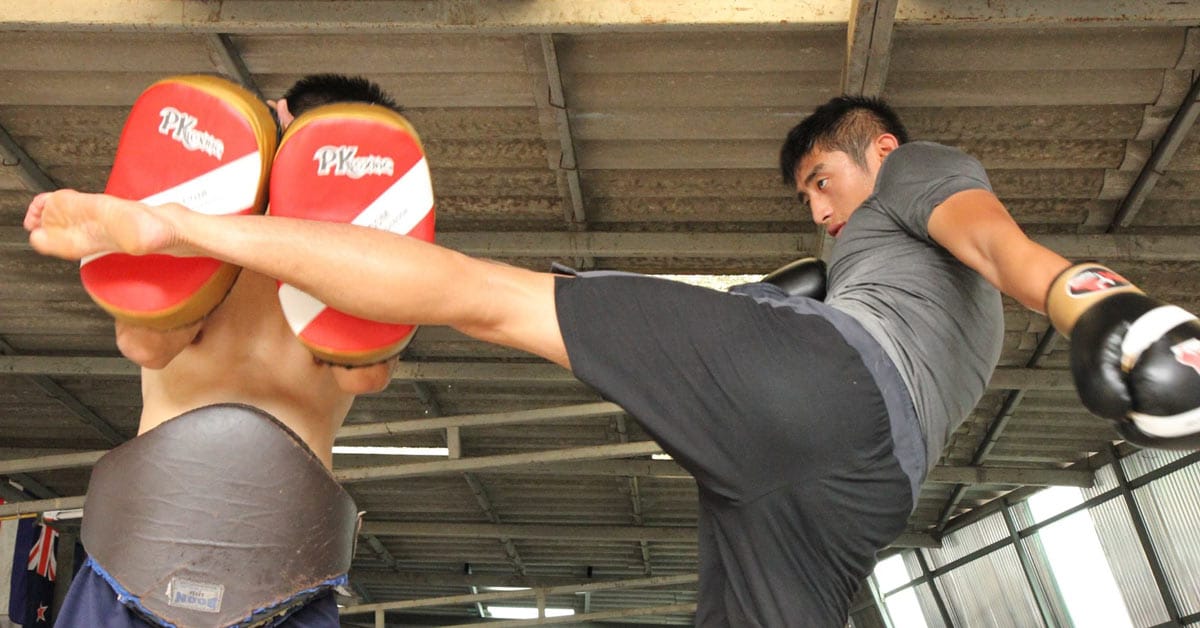 “This isn’t bad.” I thought to myself. After about 15 minutes of hitting the pads…I could barely keep my hands up. I had zero arm endurance. We would mix in some kicks as well. It was laughable how bad I was at kicking. I had little chicken legs. My body was not used to throwing kicks and it felt really awkward.

Every few minutes the head trainer would blow his whistle and everyone in the gym dropped down to do 15 pushups. After the push-ups, we would get right back up to hitting pads. I was tired but boy was I having fun.

I decided to grab some water, take a break before hitting the bags. I splashed the bottle of water on my face. The water was ice cold. The word refreshing doesn’t even cut it. I walk to the heavy bag. I had a trainer next to me teaching me how to throw some combinations. I used to wrestle in high school so I picked up techniques fast. I was punching the bag when suddenly the trainer reached his fist out and sternly hit my jaw.

“Keep your hands up”

I stood there in shock and raised my hands. I was not used to being touched in the face. I kept hitting the heavy bag in shock. I was drenched in sweat now. The humidity was getting to me. After about 20 minutes of hitting the bag, one of the trainers grabbed me and guided me to the main boxing ring.

The trainer squared me up to this Thai kid. I say kid because I knew he was younger than me. Maybe 18 or 17. He had tattoos on his back. Probably trained Muay Thai his entire life. The trainer said “spar” in broken English as he raised his hands up to show me that I was about to spar. This would be my first time sparring…ever. I was nervous. I knew to not go too hard. I did not want to end up in a full on fight in the gym.

The whistle blew. I started to dance around the ring. I was oddly…very calm. Relaxed.

“Be like water my friend” the Bruce Lee quote sounded off in my head.

I have heard that it is better to stay calm and relaxed in a fight. Angry people are in a rush, are tense, and lack mental clarity. I was excited to be sparring but I managed to keep calm.

“BAM!” I have never been hit in the face before. It is a rush. It’s hard to describe. I just felt so alive! The Thai kid launched another punch as I moved my head to the side to avoid it. Stay calm… I reminded myself. I started to be light on my feet and jumped in and out with a light quick jab. I was landing and getting out of the way…managing my distance.

I was landing and getting out of the way in most of the exchanges. My punches weren’t hard, but they were landing. Faking low, and then jabbing high. Watching his feet as I would sweep whenever he planted his foot. I had a lot of practice sweeping from wrestling. My adrenaline kept me from being tired and feeling the Thai kid’s punches.  “I am doing pretty well.” I said to myself. I could tell I was flustering the Thai kid. I was very agile from all the wrestling practices my body went through. I was imitating my favorite MMA fighters. Throwing my hands in the air, jabbing and just having plain old fun.

Then… the facial expression of the Thai kid changed. He grinned and let out a devilish scream. “This kid is crazy!” I thought to myself as the kid was smiling and throwing power punches at me. He looked like a madman. Smiling, screeching and throwing combinations at me. I jumped around, ducking and weaving to avoid most of the punches. He chased after me as I used head movement and distance to avoid him.

The Thai kid landed a hard punch clean on my jaw. I could immediately feel a small piece of residue in my mouth. I spit it out realizing it was a part of my tooth. We were not wearing mouth guards. My adrenaline kept me from really feeling the punch. “WHOOSH” the sound of a kick whiffling past my head. Just missed me…

We just kept at it. I knew the kid would get tired and slow down because he was screaming and throwing heavy shots. I started landing again. Our sparring went on for (what felt like) about 15 minutes. The trainer smiled and separated us. We touched gloves and went our separate ways.

I completed a day of training! It was exhausting but it was a thrill. I would highly recommend it to anybody willing to try it out. It was some of the most fun I have ever had. Training Muay Thai in Chiang Mai was definitely a challenge but boy was it fun. I completed a couple more sessions of Muay Thai while I was out in Thailand and it was just as fun. Word of advice to anyone that is going to train in Thailand though is to bring a mouth guard. I can still feel the chipped part of my tooth from when the Thai kid hit me clean.

I can say training Muay Thai in Thailand was one of the most fun and fulfilling things I did out there!

Brandon Leuangpaseuth is a freelance copywriter from San Diego, CA that helps various law firms such as Harlow, Adams & Friedman P.C. across the country with their public relations. You can connect with him on LinkedIn @bleuangpaseuth.