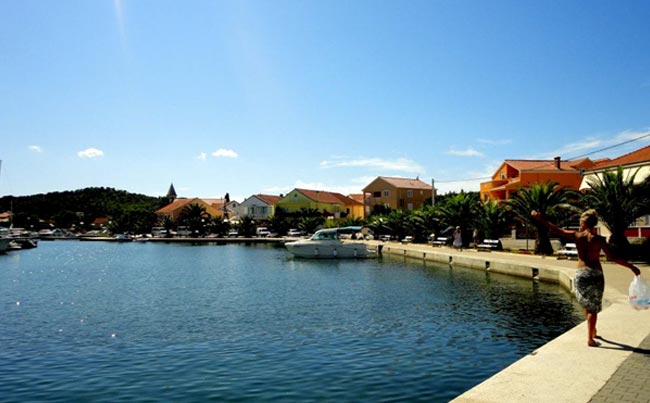 A few years back, my friend and I decided to book a trip. The start of Fall semester at university was getting closer, and after many rain days in Sweden during summer we had to get some sun before school started.

As for many students, price played a big part in our choice of destination. There were a few alternatives to choose from but adventurous as we were, we chose the place we had heard the least about and ended up in Zadar, Croatia.

I would love to tell you all about this historical, cozy, beautiful and interesting town with personality and the ability to surprise its visitors. But I wont, at least not now. I am going to make a long story short by just giving you a glimpse of one of the things my trip to Zadar surprised me with.

That Feeling of Home

My friend and I took a ferry to Ugjlan (mostly known as Preko), an island outside Zadar. It was our second visit to Ugljan. The first time we were there we had an amazing lunch in the sun, we worked on our tan and we had a few cocktails on one of the bars right by the ocean. The ocean, which by the way had the clearest and cleanest water I have ever seen. We enjoyed it so much that we almost missed the ferry back to Zadar. On our second visit we bought a ticket for the local bus, got on it and jumped off about 20 minutes later. When the bus left, there we were. In the most beautiful, calm place at the foot of the hill we just came from. We started to walk along the harbor where boats of different types and sizes were glittering from the sun hitting the ocean. The air was filled with the smell of freshly baked bread, garlic and seafood from small taverns. After a short walk we got to an area with cliffs. The ocean had stroked them for many years and because of that they were flat and suitable to lay down on. People had gathered on them, sunbathing. Different levels of cliffs made it possible to jump or walk up and down from the sea after a cooling swim, which was necessary in the heat.

We spent a few hours on the cliffs and had a delicious lunch of grilled cheese and fresh tomatoes under the olive trees in a restaurant on our slow walk back to the harbor. I am mentioning it was slow because I remember the feeling I had right there and then. It is hard to explain, but you know when you are really enjoying something? Not just having fun or liking it, no, you can feel you are there, you are present. The surroundings, the people you see, different smells of things you have never smelled before. Those old people in hats, having coffee outside their old houses while playing boardgames, the old church, which is empty and quiet but is just supposed to be there. That cross on the top of the hill, looking out over the ocean, almost guarding the small village. The old boat, painted in different happy colors, which is about to sink any minute. They are all contributing to that feeling I am trying to explain. The feeling of experiencing what you did not expect. I had that feeling, right there and then. And it made me really want to stay. So there you go, a glimpse of one of the things that surprised me the most during my trip to Croatia in the end of August a few years back. That small village, named Kukljica, made a mark on me. I know even more than before that when you do travel to places you don’t know much about you will get surprised, and the surprises are what make up the most memorable experiences.

How to get to Zadar

Ryanair»  has cheap flights to the airport, located just 20 minutes outside the city of Zadar.

How to get to Ugljan

Get around on Ugljan

Right where you get off the ferry there is an office where you can get tickets for the local bus. There are several villages around the island, many of them can be reached by foot or bicycle. Go explore!