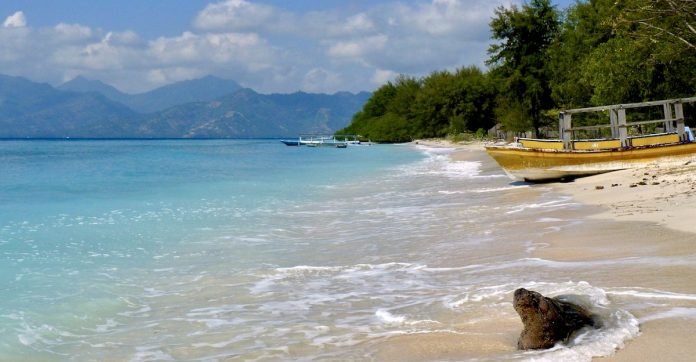 There is something special about the Gili Islands, but I can’t quite put my finger on it. The Gili Islands consists of three islands, Gili Trawangan, Gili Meno and Gili Air, located just off the northwest tip of Lombok, Indonesia. These islands have long been known as one of those backpacker locations and became famous in the 80’s and 90’s. However, someone who visited at that time would hardly recognize it today as a lot of new businesses and activities has emerged. The islands are very small, with the largest (Trawangan) measuring just 3 kilometers long and 2 kilometers wide. No motorized vehicles are allowed on the islands which makes it very peaceful and relaxed.

How to Get to the Gili Islands

If you are on Bali, I would recommend taking one of the “fast boats” that leaves several times a day. They can be quite pricey compared to what you get used to on Bali. Be sure to check out several places as the prices vary a lot and so does the boats that take you there. There is also a slower public ferry that goes to Lombok. It should only be used if you’re really on a budget as it takes forever and isn’t that much cheaper. If you’re not up for a bumpy boat ride across the Bali Sea, you could fly to Lombok, take a bus and then get on a shorter boat ride.

When I visited, I was there together with six friends from Norway. As most tourists on the Gili Islands, we came by boat from Bali and stayed around one week. Coming from the hectic life of Bali’s rural areas, it was nice with a break and the welcoming laid back-vibe and we spent most of our time scuba diving. Even though Gili Trawangan is known as the “party island” of the three, it is relatively easy to find quiet areas if going to the famous waterhole Tir na nóg is not your thing. If you do want to party, there might not be a party every night, but enough to satisfy your needs. There are regular party nights on the islands which various bars take turn in hosting.

Besides Tir na nóg (who claim Trawangan is the smallest island in the world with an Irish pub), the most popular places are usually Chappie’s Bar (in a dive shop), Rudy’s Bar, Sama Sama and Horizontal. Rudy’s Bar is an interesting place that besides having the islands cheapest liquor are also selling magic mushroom shakes. Be wary though as they have been known for mixing methanol with their spirits which has resulted in a deaths. Stay away from their cheaper “local” liquor as well, which is basically bad moonshine. The Gilis have long been known for the presence of magic mushrooms, even though it is strictly illegal in Indonesia and could in some cases lead to the death penalty. As with as with any destination, be smart.

Scuba Diving in the Gili Islands

This is where I fell in love with scuba diving. Of the seven people in our group, five of us decided to go for PADI’s Open Water certificate. The Gili Islands are known as a dive location with several dive-spots and around 10 dive shops  We took our Open Water certificate in three days, but wanting more, we all decided to also do the Advanced Open Water course to get to dive at greater depths. The course was really interesting where we could pick most of the sub-courses we wanted, such as UW Photography. We all did this at a place called Blue Marlin Dive. It is the oldest dive shop on the island and I highly recommend it. Staff was great and you would often meet them at the various pubs. The prices at the different dive shops are pretty much the same due to an agreement in between them with an Open Water course costing around 3.700.000 rupiah (approx. €290).

It is also possible to surf and they have a decent surfspot which should be left to more advanced surfers as the waves can be very tricky with an underlying sharp reef. It is fairly easy to rent a surfboard off a local if you should decide to try it. And use boots. Keep in mind that Trawangan is not really a surf destination and more towards scuba diving and snorkelling.

When we first arrived on Trawangan, we had some trouble finding accommodation. Not because of the lack of hotels, rather that we were seven guys who wanted to live in the same place and there were few vacant rooms in our price range  So instead of going low budget, we decided to rent a luxury villa the first night as a treat. We stayed at Kelapa Villas as they could provide us with a seven bedroom villa. Even if you are on a rather low-budget “backpacker trip” it was really awesome spending one night in this place to taste some luxury. When we arrived we were served fresh coconuts which was a nice touch to it.

The following nights we spent at various places as we moving each day to find a better place. So if you are going here during high season, make sure to book your rooms in advance, especially if you need more than one. There are several places to stay ranging from budget to luxury. A double room in the budget area would cost you between €10-30 and the more luxurious places starts at €80-90. There are also several mid range alternatives and in total the island hosts over 30 hotels in all ranges.

The Gili Islands is a great place to stay if you want to get away from the more hectic life of Bali and should be visited if you have the time. So if you are in the area, go for it.

Solo Travel Guide: 3 Days in Bangkok on a Budget