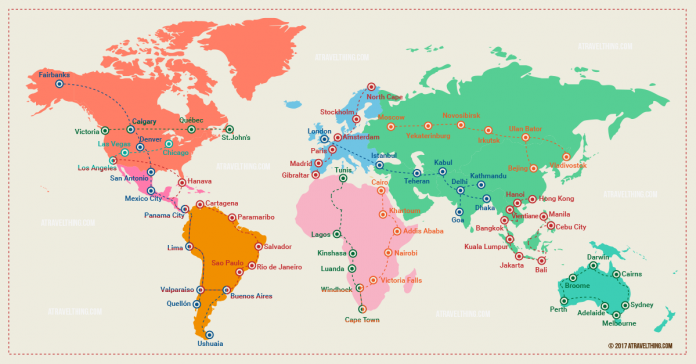 There is something to be said for the sense of freedom and adventure that a good, old-fashioned road trip provides. Far too often these days, we pick a place to visit, arrange a place stay, buy airfare and fly there. Yeah, flying around is quick and sometimes convenient, but we sometimes miss the “in-between” when flying from point A to point B. Small towns or villages, grand vistas, wonderful stories and more are to be had when hitting the open road. With that in mind, we have updated our “famous” infographic showing the best overland routes around the world in hope of inspiring more travelers to take that once-in-a-lifetime, epic overland adventure.

Route 66, also known as US 66, is an historic and iconic American highway. Although US 66 no longer exists officially, the original route is still mostly drivable via state and local roads. Route 66 has a whole sub-culture dedicated to it which can be seen along the road long with festivals and motor cruises.

The Trans-Canada Highway is a transcontinental highway which travels through all ten provinces of Canada and one of the worlds longest national highways. The highway passes through many cities and places so make sure that you have enough time to see it all.

A series of official and unofficial overland routes from Alaska to Argentina, this Pan-American Highway passes through 14 countries in the Americas. It has a world record for longest “motor-able road” in the word. The Darien Gap (100 km) in Panama has to be done with boat. Avoid areas controlled by cartels.

Not an official trail but this overland route refers to the areas visited by “gringos”
in Central and South America. There is a lot of cultural diversity as well as scenic views along this route. Tip: Start off with a flight to Cancun to avoid the hectic Mexico City, then choose 1 direction and method of transportation.

The longest railway line in the world, with a length of 9,290 km (5,770 mi), The Trans-Siberian Railway has long been on the list for many travelers. The railway splits up into three different lines towards the end, the continued Trans-Siberian, the Trans-Mongolian, and the Trans-Manchurian.

The Gilbraltar-North Cape has many routes that can be taken through Europe, depending on the time and money. The shorter route will give you around 60 hours of driving time. Be sure to go off the route and visit other parts of Europe while you have the chance.

An old infamous trail once popular among hippies in the 60s and the 70s. The basic route was from London to Delhi but often continued to Goa and Kathmandu. This overland route can be difficult depending on current conflicts in the middle east.

A nickname given to the growing routes around South East Asia frequented by backpackers. Restaurants (usually serving banana pancakes), hotels and entertainment along the route have adapted to cater to backpackers needs. The Banana Pancake Trail does not have any geographical definitions but consist of several shorter routes.

The Trans-Saharan Highway is one of the oldest trans-national highways and
the most complete. It can be rough to get through the middle of Sahara, though. If you want more, continue from Lagos down to Namibia or even South Africa.

The Cairo – Cape Town Highway will take you most of the way down Africa, but a little detour to Namibia towards the end might be worth it. Some parts of the road are unpaved, giving a rougher journey. Be prepared with visas and papers for all the border-crossings, as well as local conflicts.

Highway 1 is a network of highways going around the continent. It’s the longest national
highway in the world with 14,500 km (9,000 mi) of road. There are several shorter routes to consider as well, such as Explorers Highway and Great Ocean Road.

Do you have a favorite overland route? Let us know in the comments below!